For me, Halo is the game that defined my teenage years. I spent more time playing Xbox Live than I did with my friends; and idolized Master Chief and his creator, Bungie. After four glorious outings with the big green guy, Bungie has released their newest IP, Destiny. As an adult, my feelings towards the game could not achieve a higher level of admiration. However, the similarities Destiny shares with Halo have been tugging at my youth since the first time I booted it up; and have been consistently bothering me.

Upon awakening on the outskirts of the Cosmodrome, the game instantly feels like Halo. The user interface may be changed a bit, but the way it feels and sounds is way too reminiscent of prior games. The general gameplay is that of a standard first person shooter. You are given an objective, and although it’s considered an open world, you are still confined to a single, linear path, to complete your goal. Although this is a common similarity among all FPS’s, when advertised as an open world, you would expect a few more options in terms of missions. 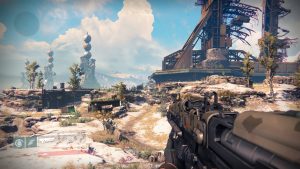 Another, strikingly comparable feature would be the weapons and enemies. The pulse rifle is practically a duplicate of the battle rifle, the scout rifle is used in the same way as the DMR, and the auto rifle fires exactly as the assault rifle in Halo does. Actually, every weapon type in the game can be traced back to a weapon in Halo. As for the enemies, there are four factions; the Fallen, the Hive, the Vex, the Cabal. Now, I have to say, these enemies are varied enough so that they don’t become completely stale after hours of gameplay, but they were clearly familiar to me when I first started. Using the Fallen as an example, the Vandal’s not only share a silhouette of their Elite counterparts, but the AI inherently feels to be the same as well. It should also be noted that the Hive serve almost the exact same role as the Flood did.

My last gripe would be the story. Between Marathon and Halo, Bungie was always able to build a mythology into their games that would leave a lasting impression. I went out of my way to absorb as much of Halo’s lore as I could. After I finished the main campaign, I found myself caring less what happened with the Traveler, the Speaker, or the Ghost. But why? The legends that were so easily cemented in the previous games were notably absent in Destiny.

I would like to admit that I started this post with a negative attitude and the intention to point out the flaws in my favorite studio’s new game. However, not everything about Destiny is negative. One of the things it it does extremely well is that there is a substantial amount of social interaction; even when stifled through technicalities. In my opinion, raids were perfectly executed. Having never played World of Warcraft, or the such, I didn’t quite know what to expect when the Vault of Glass opened up. After running through it with my friends, it was made abundantly clear that without precise teamwork, everyone would fail. Every person in the Fireteam had a part, and if they didn’t perform flawlessly, you had to restart. Something very new and fresh to me. Another aspect that I really enjoyed was the way you level your character and equipment. Even though you had to suffer through the grind, leveling up was quite satisfying. Skill trees felt a lot like Diablo or Borderlands, and leveling equipment was very natural in terms of progression. 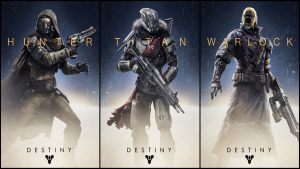 It’s quite obvious that I am upset that Bungie, which in my opinion is a developer in the highest regards, released a product that was undeniably a rehash of their older games. But, you know, that’s what Bungie is good at. And I have to say, I think my infatuation with the Halo franchise has, without a doubt, clouded my opinion of Destiny. Since it has been announced as a yearly franchise, I look forward to seeing what Bungie and Activision have planned for this new IP, and in what directions they take it.

UPDATE (3.18.15): After many more hours spent in Destiny, as well as the release of The Dark Below, I can positively say that my opinion of Destiny has been changed. In all honesty, other than a lack of story, I believe that it was easily the best game of 2014. However, I still wish that they deviated from the Halo formula and genuinely built a new and exciting universe with all the expectations that I, along with many others, had for the game.