As a game, Minecraft offers an incredible amount of entertainment a replayability. Since the year it was released, I have spent many hours in these procedurally generated worlds fending off creepers, building structures to survive the night, and mining precious ores to progress further into the game. Minecraft is a game that will define a generation… But it will do more than that.

Minecraft started as a project by Markus Persson. The intent was to create an endless world with RPG elements. For the first few days in the game, the player needs to quickly mine resources and build defenses in order to survive the night. Lethal mobs of creatures come out at night to attack the player. Along with building structures, the player needs to build weapons and tools. The weapons help in fighting the creatures and the tools allow for quicker mining. As the days go by in the game, surviving turns to mining for precious resources. The further you go down into the world, the more precious the minerals are. Crafting begins to get more difficult as well, needing much rarer materials. Once the player has built up enough defenses and has made the right tools, they can make the journey to the “End” and defeat the Ender Dragon. It’s possible for a single player to get that far, but it’s much easier with a few players and needs a lot of effort and organization. 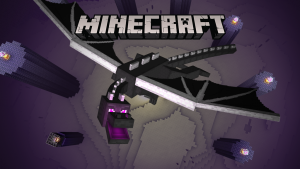 Generally, these goals would be achieved through institutional organization. From what I could find, institutional organization is based on normative procedures. These procedures are then standardized and instituted across the organization. In terms of Minecraft, it would be that one person, or a group of persons, are responsible for maintaining the ovens to smelt the precious metals. Another person, or group, is responsible for chopping down tress and collecting wood resources. One final person, or group, would be in charge of mining the precious metals. At the top, there would be one more person, or group, that decides what all these other groups are responsible for and determines their course. As this is generally how most workplaces operate, I expected Minecraft would operate the same. I was wrong.

It wasn’t until I recently started playing Minecraft with my five year old son that I saw Minecraft as a tool for learning instead of just a game. To take it even further, at the beginning of the semester, I built a server and invited 10 people to spend some time together in this server and analyze how Minecraft changes the way people interact and communicate. The most obvious impact I noticed was how traditional institutional organization went completely out the window inside the world of Minecraft.

The ten people I invited were a combination of my brothers, my friends, and my son. They ranged in age from 5 to 35 and half had held jobs and the other half have not. I believed this to be a good combination of people to study from. When I first invited them to the world, the two that were most experiences with Minecraft took over the course of direction. They informed us that we needed to find a good place to set up our homes that would be close to all the resources we needed. After we found a base, the group split up and claimed various places as our personal homes. At this point, I would expect us all to work together to achieve our goals. This isn’t what happened.

People did split up, but retained focus on the goal. They built their separate houses and mined their own resources. Resources were kept operate but pooled. If anyone needed something, they were allowed to take them so that we all kept going in the same direction, at the same pace. After a few days of personal exploring, we came together to build a giant mine. No one person took control, no one person made all the decisions, it all happened organically. The most notable observation in the mining process was smelting. The ovens needed to be maintained to continue smelting precious ores so that we could continue. Instead of having one person do that, we all would maintain it as we walked by. If someone saw something that needed to be done, they just did it. In institutional organization, a single entity would be responsible for all of this. Either making the decision where to mine, maintaining the furnaces, or mining down into the earth.

After a few days of mining, we had enough resources to find the End and the Ender Dragon. We needed to find a portal to the End in a forest mansion. There was zero traditional organization in this happening. We all just started exploring until we found the portal. When it came time to fight the Ender Dragon, organization did come into play. However, it was very loose. The organization observed was based on roles. Specific actions were not delivered, but roles of archer, swordsmen, medic, and mage, were defined. As of 5 days ago, we defeated the Ender Dragon.

Minecraft has sold over 100 million copies worldwide and is on every major console and mobile platform there is. And through my experiment with my son, family, and friends, there is one final conclusion I could come up with. Minecraft is teaching an entire generation to operate independently and achieve complex goals without any sort of traditional institutional organization.

This experiment was to see how people, across all ages, operate in the digital world of Minecraft. Moving forward, and as a father, I want to do more research into how this will affect the workplace in 20 years. If these children can operate under these conditions, will they when they find a job?