Now, I’ve got to let you know, I am a huge fan of The Lord of the Rings; the books and the movies. The Hobbit book is also my favorite book in “The One Ring” saga; so I may be a little biased in this.

The first thing you’ll notice when you start this movie is how incredibly awesome it is to watch Smaug absolutely destroy Lake Town. Smaug is by far the most organic and smoothest dragon to ever be depicted on a movie screen. His movements are fluid in nature, and Benedict Cumberbatch voices him with fearsome grace. The set piece, sounds, and lighting were practically perfect. The only problem… it was way too short. Like every opening in Peter Jackson’s Middle Earth pictures, the opening sequence is small in comparison to the rest of the movie, yet they offer some of the most intriguing narratives. On top of that, Smaug was a powerhouse in the previous movie, yet it was so easy for Bard to fell the beast. It felt cheap, and somewhat forced. Shortly after, you gained the same feeling when the White Council took on the Necromancer (Sauron). Again, cheap and forced. 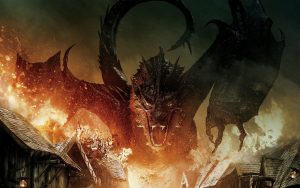 Now, one thing I really liked about the movies was Luke Evans’ portrayal of Bard. There was many a time when he felt like the main protagonist, as opposed to Bilbo. However, this only lasted for about the first half of the movie. Whether the villain (Furious 6), or the hero, Luke Evans is always a blast to watch. However, for such a strong performance, there was bound to be someone that’s just plain annoying; Alfrid. Watching Alfrid really, really, frustrated me. The character was poorly written, and crudely represented by Ryan Gage.

The actual battle itself was actually quite good. You could argue that it was worth the 7 hours it took to get to it, but the crappy CGI kind of hurt to watch. It was nowhere near on the same level as the rest of the series (Smaug, Azog), or even the epic battle of the Lord of the Rings; and those were years older than this movie. The Siege of Gondor, The Battle of the Pelennor Fields, and Helm’s Deep were much better and way more theatrical. Anyway, it was still satisfying to watch and offered a lot in terms of entertainment. Other than the CGI, the only other thing I didn’t like was **MEGA SPOILER** Kili, Fili, and Thorin dying. It was more in the way they died… It was poorly executed, but although, this could be due to the fact that they made three movies out of one piece of source material. The end of Azog and Bolg were definitely high points near the end.

One of the last things I have to say is that the entire movie was paced in a very different way than the rest of the saga. Like, seriously different, and extremely noticeable. As I mentioned, they turned one book into three movies. So this last movie was nonstop action. I’m a guy, and I like action, but I also like dialogue; especially in fantasy movies. The first movie had too much dialogue, but the second, the second had a perfect blend of action and conversation. Watching this one fail at the precedent set by the Desolation of Smaug was painful. The ending, which was really good with setting up the The Lord of the Rings, was broken by the Sackville-Bagginses’ declaring him dead and selling off his estate. Oh well… Other than that, it still ended great. Roll the credits with the very fitting Billy Boyd’s (Perry from The Lord of the Rings) “The Last Goodbye”.

I want to say that I still enjoyed the movie. Smaug was awesome, Bard was great, the battle epic, and the ending damn near perfect. I can really summarize many of my griefs with this film by comparing it to the Star Wars prequels. Which is kind of a shame. The first two didn’t come across as post 1999 George Lucas-esque, which makes it extra shitty that this one did. This movie, Peter Jackson final foray into Middle Earth, never had the grandiose that every other movie he made had.