As much as I enjoy nerd culture and all the things it has to offer, there has always been one subject that I absolutely stayed away from; Dungeons and Dragons. It’s not that I didn’t like the idea, or feel any certain way about people who do enjoy it, it was more of one of those things that I’m pretty sure I wouldn’t be in to. Well, last night, I said, “What the hell”, and gave it a try.

After hearing that people have never tried it, or even heard of it, Mike had offered to be the Dungeon Master (DM) and introduce a handful of us to D&D. The way it works is that the DM creates a basis of a story that the characters follow through. You build a character and then, as a group, play through this story with the DM guiding you along. Your character, and the story, is all written down on pieces of paper, and your attacks and hits are all decided by rolling various sided die. You do, however, get pretty badass figurines to represent your character on the map. 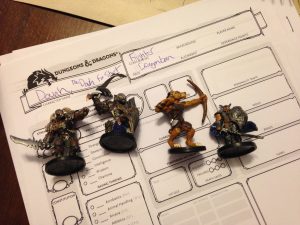 Four of our character figurines.

I offered to host this gathering of legendary heroes; in which case everyone arrived at my house around 3pm. Jason, Patrick, and Clark, whom are apart of WMCan’tBlog were there; along with Ashley, Sam, Kyle, Jake, and Mike’s wife Kelsey. I honestly did not know what to expect. Ash and Kyle’s sole intentions were to observe the “nerdfest”, which they did.

The first thing I realized about Dungeons and Dragons was how incredibly long it took to get ready. It was almost two hours before we began. This is because you need to pick your character’s race, your character’s class, roll for stats, and then assign traits. With 8 people, many of whom have never played, it took a very long time. The character race I chose was the Dragonborn. Not only because I am a huge fan of Skyrim, but because he could breathe fire, which is pretty badass if you ask me. For the class, I chose the Fighter. The Fighter is a good, well-rounded, melee class. I also named my character Dovah, short for Dovahnkiin, which is what the dragons call the Dragonborn in Skyrim. And yes…… I went there…. 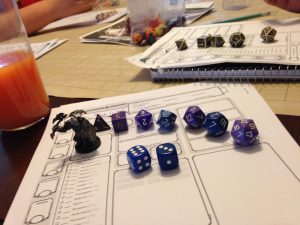 My character and dice set.

When we finally started, our characters awaken in a dark room, which they are then pulled from and presented to a Gnome King. The king warns of a great evil that needs to be vanquished, and which is the reason he gathered his realms mightiest heroes. He then teleports us to a field that has a small building in it. Keep in mind that this is all narrated by Mike, our dungeon master. Around this time, it really becomes enjoyable. I believe it was due to the social aspect that is presented because of the confines of paper and pencil, but still all in the same room together. By now, we had already given our characters dicks awesome weapon names; The Schlong of Wrath, The Baby Arm, The Great Wang, The Womb Raider. We then, as a group, were able to determine what we could do next. Jake volunteers to kick in the door…

I’ve got to say, for the entire time, Jake’s ineptness at rolling dice became very clear. When you roll the 20-sided die to determine the hit chance, a 20 is an automatic hit, and a 1 is an automatic failure. So when Jake decides to kick in the door, he rolls a 1. In fact, he pretty much only rolled ones. Mike, being the merciful DM he is, only allowed Jake to walk away with a limp, however, it could have been much worse. Actually, Jake’s sole purpose of playing was to try to destroy Clark’s, Sam’s, or my character. It was quite entertaining. 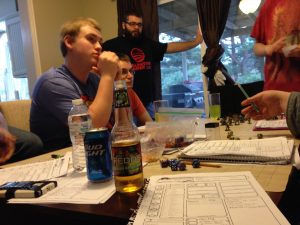 Continuing along, Jason knocks and we enter the building to encounter an Orc and a Gnome. At this point, it becomes clear to me the way battle is done. Much like in a video game, you are given the opportunity to attack an enemy and the chance of a hit, and the damage that is dealt, is handled randomly. Luck, as it is, plays a very important role in this game. Sam and Jason, fortunately, have a lot of luck. They slay the two foes, we loot the room, and then continue into the next room.

This goes on for five rooms total. Some of the more interesting things to happen during this time was the variation’s in enemies, Clark trading his shitty bow skills for swords, and Jake interrogating a Goblin by asking it, “Tits or GTFO”. In fact, he even threw said Goblin at Sam’s character. Which illustrates how crazy this game can be. It’s entirely dependent on you and your team’s imagination. After that, we entered the fifth room, which was the boss room.

This is kind of where my frustration began. We were introduced to a Mindflair, which is basically a Cthulhu character, along with three other baddies to serve as the boss fight. The only problem is that they teleported away and filled the room with generic enemies. I assumed that once we beat the room, we would get an opportunity to take on the bosses, mostly because I had been saving my badass fire-breathing for the boss. But, it ended. The game just ended. I then found out that the way it works is that you keep track of your characters and gain experience to level them up. We weren’t high enough levels yet, and should we all get together to do again, we can eventually take on the Mindflair, and someday, a dragon. 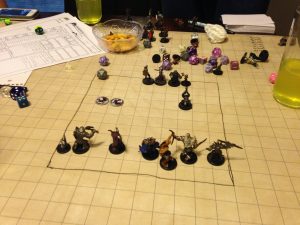 This would have been the Boss fight.

So, this is where it ended. I reflected on it and realized something about Dungeons and Dragons. I used to think that it was one of those things reserved for only the nerdiest of nerds. However, I found myself enjoying it a lot more than I thought I would. Had I grown up in a time without video games, or the such, I can easily see myself liking it even more. Unfortunately, as much as I enjoyed the social aspect, and not to say I would never do it again, it really just didn’t feel like the thing for me. I’m happy, though, to have given it a try and to finally find out what it meant to play Dungeons and Dragons. Also, a huge shoutout to Mike for being an excellent Dungeon Master!!!